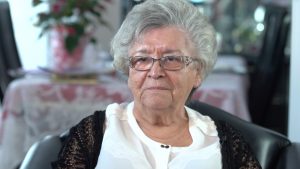 Year: 2017
Location: Edmonton
Profile:
Doreen Wabasca has been throughout her life a courageous and dedicated Indigenous activist for celebration of identity and culture, equity, and non-discrimination. Born in Grouard, at age 8 she was sent to a Residential School, where she experienced the suppression of her Cree language and her culture. She saw her sister being beaten and was aware of other abuse of girls at the Residential School. At age 15, she refused to go back to the Residential School. She accompanied her father, who worked at logging camps and construction sites, and through this learned skills including truck driving. As a young mother, she took training in construction equipment and safety and, with help from Native Outreach, was hired by the City of Edmonton. Ms. Wabasca has noted that she was the first woman hired by the City in a road construction job. At the worksite, she faced continuous discrimination, including verbal abuse, but she would not give up. She describes with gratitude the support she received from Muriel Stanley Venne and Native Outreach. Ms. Wabasca became a foreperson for the City. She later worked as a truck driver in Edmonton and then went to Fort McMurray, working in construction as a foreperson, at camps as a cook’s helper, and for Syncrude. Again, she faced discrimination, including sabotage of her work equipment. In researching her family history, she became aware that she is a descendant of the Papaschase Band/First Nation. Doreen Wabasca was a recipient in 2002 of an Institute for the Advancement of Aboriginal Women Esquao Award for Community Involvement.
Keywords: Camps; City of Edmonton; Construction; Cook’s helper; Co-worker exclusion; Discrimination; Equity activism; Indigenous; Intersectionality; Muriel Stanley Venne; Native Outreach; Papaschase Band; Papaschase First Nation; Racism; Racist slurs; Residential Schools; Syncrude; Truck driver; Women in construction
Transcript: Download PDF