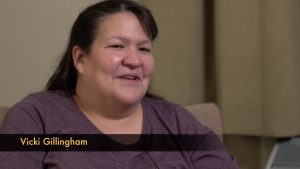 Year: 2015
Location: Fort McMurray
Profile: Vicki Gillingham was born in Pembroke, Ontario, but her Indigenous mother had Prairie roots and moved to Fort McMurray when Gillingham was two years old. She grew up in both Fort McMurray and Fort Chipewyan. After high school, she took at 10-month process operator program at Keyano College. She began working at Suncor in 1980 at age 20. First she worked in the cokers, doing physically challenging labour. She was the only woman in the plant at the time. Her next job was in the tank farm, and there she faced both racism and misogyny. She persisted as a Suncor worker and over time became unit leader for the “off-plots,” that is everything outside the plant and offsite, including utilities maintenance. Six men reported to her in 2015.
When she faced discrimination, Gillingham received no support from the union. But later on, she was persuaded to join the women’s committee of UNIFOR and later became chairperson of that committee. A single mother, Gillingham found the company unsympathetic to women, particularly with its policy of sometimes forcing overtime. She was disciplined at one point for refusing an overtime shift because her usual childminders were unavailable.
Gillingham has mixed reactions to working at Suncor. On the one hand, she believes that the work that she currently does contributes to limiting damage to local communities from plant operations. But, on the other, as an Indigenous person, she worries that cancer rates and lupus rates in Fort Chip are extraordinarily high, and she accepts that Suncor is the culprit.
Keywords: Childcare; Fort Chipewyan; Indigenous communities and health impacts of oilsands; Indigenous women; Missing and Murdered Indigenous women; Process operators; Suncor; Unifor; Women’s Committees of unions.
Transcript: Download PDF