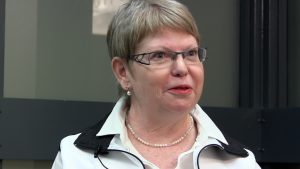 Year: 2015
Location: Calgary
Profile:  Karen Craik is the provincial secretary-treasurer of the United Nurses of Alberta, a position held since 1996.  Craik started her nursing career in 1978, after graduating from Mount Royal College in Calgary, and has worked in several Calgary hospitals over the years, learning the importance of mentorship to the nursing profession.  She has a long history with UNA, beginning with the strike of 1977, the year UNA was founded. Craik served in several executive positions in her local board.  She was elected to the provincial UNA Board as south central district representative in 1986, and then Secretary-Treasurer in 1996.  She learned how important strong leadership is to the union, having lived through the strikes of 1982 and 1988 and having faced various court injunctions and huge fines ($450,000) levied against UNA in the 1988 strike, defying legislation (Bill 44) which prohibited strikes for the nurses’ union.  In the 1990’s Craik and UNA faced incredible challenges with Klein era cutbacks.  With the Staff Nurses Association merging into UNA in 1997, membership numbers were boosted and membership sits at over 30,000 province-wide.  Craik is very supportive of union education for workers on employment rights.  She has travelled extensively in the province to ensure that UNA members are informed and educated on their collective agreement.  She has also been involved in the broader labour community, as founding Chair of the Calgary Workers’ Resource Centre, and currently sits as Vice-Chair on its Board.  She also serves the broader community on health issues, serving on the Board of Ovarian Cancer Canada and is the founding co-chair of the Ovarian Cancer Walk of Hope in Calgary.
Keywords: Alberta Workers Health Centre; Calgary Workers’ Resource Centre; Court injunctions and fines; Heather Smith; Klein government; Mentorship in Nursing;  Privatization;  Staff Nurses’ Association; UNA 1988 strike; United Nurses of Alberta
Transcript: Download PDF