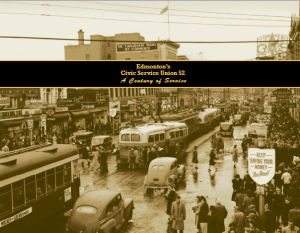 Edmonton’s Civic Service Union 52: A Century of Service is a publication of Civic Service Union 52 (CSU 52). It was produced by the CSU 52 History Committee with the assistance of the Alberta Labour History Institute (ALHI) as part of the celebration of the 100th Anniversary of the Union.

The short narratives in this book attempt to trace the birth, growth, setbacks and accomplishments that have shaped both CSU 52 and the City of Edmonton over the past century. e story they tell is not intended to provide a complete or authoritative history. ey are a collection of ‘memories’ that we hope will promote an appreciation of the Union and its members, and the role they have played in building and running the City.