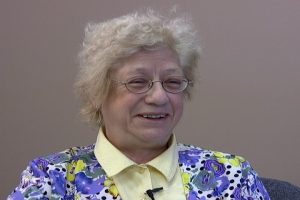 Zonia came from a Saskatchewan family that was highly supportive of health and social security programs introduced by the province’s CCF government. After graduating from College in Edmonton, she came to work in the assessment and tax collection department of the City of Edmonton 1966, becoming involved with the Union where she held a number of executive positions, including Chief Steward. Zonia has clear memories of her early years in the Union, and particularly the times that such union benefits as Maternity Leave were won.