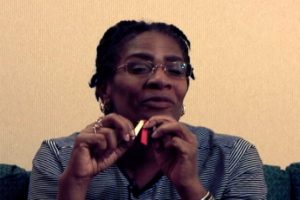 Year: 2009
Location: Calgary
Profile: Yvette Lynch was one of the striking laundry workers at the Calgary General Hospital. Born in Barbados and raised in Montreal, she moved to Calgary in search of a better life and found work in the hospital. A single mother, she was determined not to let the hospital fire the laundry workers overnight without a struggle. After the strike she played a role in trying to reconcile the workers who struck with those who stayed behind. She felt a deep sense of pride that a group of low-paid workers could force an aggressive provincial premier to blink and feels there is a lesson for all workers facing oppression in the strike in which she was involved.
Keywords: Calgary laundry strike; Caribbean immigrants; Contracting out; CUPE; Hospital workers; K-Bro; Klein cutbacks; Laundry workers; Privatization; Retraining; Single parents; Strikebreakers; Strike support
Interview Transcript: Download PDF