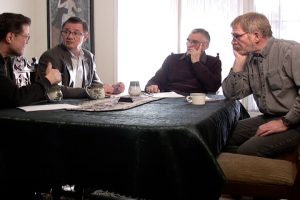 There are four discussants. Tom Fuller was a researcher in Edmonton with AUPE at the time of the Calgary laundry workers’ strike. Winston Gereluk was PR director for AUPE. Jim Selby was research and communications director with the Alberta Federation of Labour. Dave Werlin was regional director for CUPE. The discussants suggest that the mood among the workers in Alberta was far more radical than  the union leaders who were negotiating with the government may have suspected. A greater climbdown by the government might have occurred if the strike was allowed to spread to other hospitals and to a general strike of Alberta unions. But union leaders were wary of riding the wave of anger because Alberta law gave the government the right to decertify unions that engaged in wildcat activity.