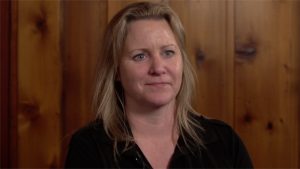 Year: 2014
Location: Jasper
Profile: Lori McDaniel is a heavy equipment operator at the Suncor mine in Fort McMurray and a member of UNIFOR Local 707A. She was in her 300-ton, two-storey truck when it exploded into flames, forcing her to leap to the ground, sustaining serious injury. Her difficulty dealing with a company determined to avoid a ‘lost-time injury’ persuaded her to become the health and safety representative for a crew of 300 people. It also persuaded her to organize and co-chair the first political action committee in her Local.
Lori ran as a New Democratic Party federal candidate in 2015. Her opposition to proposals for pipelines to export bitumen to refineries outside Canada was unpopular in McMurray. She learned that many highly paid workers in Fort McMurray were mired in debt because of a lifestyle dominated by consumerism and easy credit. As a woman in a non-traditional line of work, Lori was subjected to sexual harassment from the day she started her job, and describes one incident in which she experienced the significant gender power differential in the employment relationship. As OH&S representative, Lori learned how difficult it was to enforce health & safety laws and standards when workers are driven by productivity demands.
Keywords: Health & safety representative; Heavy equipment operator; New Democratic Party; Pipeline politics; Sexual harassment; Suncor; Temporary foreign workers; UNIFOR 707A; Worker debt.
Interview Transcript: Download (PDF)