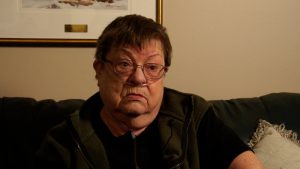 Year: 2001
Location: High River
Profile: Beth Wiwchar grew up as the daughter of a union activist hardrock miner in Kimberley, B.C.  She launched her secretarial career with the City of Calgary in 1954, beginning a lifelong struggle for recognition and full equality for women workers, while a member of IBEW 254. Kay Golar and Local 379 of the Canadian Office and Professional Employees Union proved an inspiration. A mass lay-off of married women employees by the City of Calgary strengthened labour feminists’ resolve to fight for equality. Wiwchar next worked for 26 years as a secretary for the Calgary local of the Bricklayers Union, encountering sexism in the union movement as well as the conversion in office technology from typewriters to computers. The building on 10th Avenue and 3rd Street where she worked became the Calgary Labour Temple, a focal point for the City’s labour history for many years.  She describes her activities in the New Democratic Party and the Calgary and District Labour Council in the 1980s, the latter struggling against government-permitted employer union-busting tactics, including recognition of the employer-dominated Christian Labour Association of Canada (CLAC).
Keywords: Bricklayers’ Union; Calgary and District Labour Council; Canadian Office and Professional Employees Union; Christian Labour Association of Canada; New Democratic Party; Pensions for women; Union secretary; Women’s struggle for workplace equality.
Interview Transcript: Download PDF