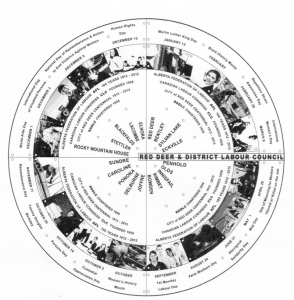 The Alberta Labour History Institute has received the good news that funding has been approved to allow the installation of a large disc in downtown Red Deer that will commemorate the history of labour in that community.

The Project was conceived five years ago by the Red Deer & District Labour Council as its contribution to ‘Project 2012’ a joint ALHI/AFL initiative to celebrate the Centennial of the Alberta Federation of Labour (AFL) in 2012. Labour activists in Red Deer decided to mount a highly-visible piece of art in their downtown to serve for generations to come as a reminder of the work members do to serve Red Deer and surrounding area.

They commissioned a large stainless steel disc, approximately 3 metres (10’) in diameter to be mounted on the east wall of the Central Alberta Trades and Labour Society (CATALS) building at 5116 – 47 Street in Red Deer. It would be embossed with laser-etched images of a variety of workers to portray labour working for the Red Deer area through the RDDLC, the AFL and the CLC. It would recognize communities in the area, as well as important days celebrated by labour. A plaque adjacent to the artwork would explain the Disc’s significance and recognize all its donors.

In addition to canvassing local unions for funding, ALHI applied for and received $20,000.00 from the Alberta Culture’s Community Initiatives Project (CIP), which allowed work on the disc to be completed. Unfortunately, the Society, which owned the building decided to sell it, and the Council had to find a new location for their disc.

After years of searching by the Council, the Government of Canada offered a cement pad on a prime spot by the Waskasu Heritage Trail in a new downtown park in Red Deer River. However, this posed new installation issues requiring many more thousands of dollars. ALHI came to the rescue, once again, as Winston Gereluk worked with the Council to draft a new proposal asking for $12,500.

Happily, the CIP approved the complete amount. In a letter notifying President Alvin Finkel of the grant, Culture and Tourism Minister Ricardo Miranda said, “Your organization is to be commended on its hard work in connection with this project. It will have a positive effect on the quality of life in our community.”