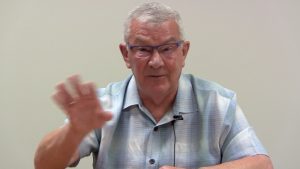 Year: 2016
Location: Edmonton
Profile: Dennis Malayko’s interest in health and safety began when he studied the health effects of pesticides in high school, and continued when he went to work at Edmonton’s Charles Camsell and Royal Alexandra Hospitals. He earned a Certificate in Occupational Health & Safety (OH&S) while working as safety officer at the Celanese chemical plant in East Edmonton. In 1977, Malayko was hired by the Alberta Union of Provincial Employees as the Alberta labour movement’s first full-time OH&S Officer, with a mandate to create a program under the Province’s new OH&S Act. During the 40 years he worked for AUPE, he established a complete joint worksite OH&S program with 75 functional committees for the general service area of government, as well as promoting health and safety committees in the boards and agencies organized by AUPE. At the Alberta Federation of Labour, he spearheaded the formation of the Alberta Workers’ Health Centre, as well as working to create the Canadian Centre for Occupational Health & Safety (CCOHS).
Over the years, Dennis trained and engaged health and safety activists across Alberta on issues including violence in the workplace, ‘sick workplaces,’ PTSD, and the lack of joint worksite committees in most workplaces; Alberta was the only jurisdiction where such committees are not mandatory. He helped initiate the Workplace Hazardous Materials Information System (WHMIS) in Alberta, and also handled the first Alberta case here a worker exercised his statutory Right to Refuse unsafe work – and won. His later campaigns centered on bullying and harassment in the workplace, as well as dealing with dozens of safety hazards at the new Edmonton Remand Centre that led to a wildcat strike in 2011.
Keywords : Alberta Workers’ Health Centre; CCOHS; Celanese; Joint worksite health & safety committees; Nursing homes; Occupational health and safety from labour’s perspective; PTSD; Refusal of unsafe work; Remand Centre strike, Edmonton.
Transcript: Download PDF